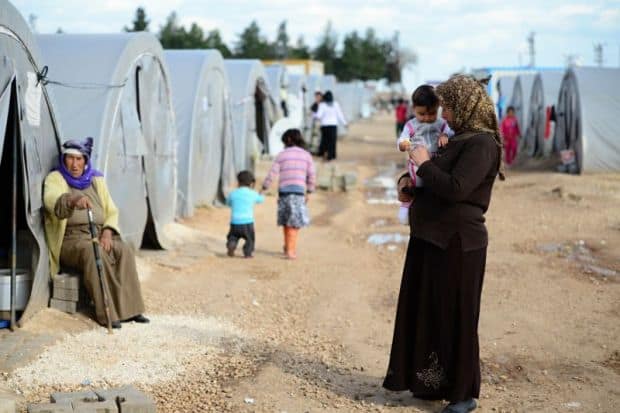 Almost 40,000 Syrians who were already confined there before the coronavirus live in the Azraq camp. Now they have to adapt their lives to more restrictions

We live in moments of uncertainty. The Covid-19 pandemic has spread rapidly throughout the world and has shown that it does not matter which country we are in, whether it is from the north or the south, developed or developing, small or large; We are all vulnerable to this emergency. None of us is immune.

The measures taken by countries to combat the spread of the virus follow a simple reality: governments are acting to protect their citizens. But not all of us have the privilege of having our rulers act to protect us. Some people are stateless and were forced to flee their homes, provinces, and countries to try to stay safe as refugees.

The Azraq refugee camp in Jordan is home to 36,826 Syrian citizens who fled their country trying to escape the violent conflict that has dragged on for years.

In an attempt to curb the spread of the outbreak, the Jordanian government has imposed one of the strictest closures seen in countries around the world. So far there have been no cases of Covid-19 in this camp and the authorities intend to maintain the situation as before, implementing a series of measures. The Azraq settlement is densely populated, its inhabitants live overcrowded, and there are deficiencies in access to water and sanitation. This, coupled with the shortage of health care services, anticipates an unprecedented disaster that is about to occur.

The camp is divided into four main sectors, with Plan International operation centers in three of them. Each has a school, a health center, and a marketplace that caters to the needs of its local residents.

Residents stay in tin houses. Families with less than seven members receive one, and those that exceed that number receive two. Generally, there is only one toilet for every eight families, although some people have found innovative solutions to improve this situation.

On one of my field visits I met Abu Omar *, a Syrian refugee who has been collaborating with my organization since 2017 as a volunteer. In 2016, he arrived in the Azraq refugee camp with his seven-member family, after spending six months in the Rukban area, located between the Jordanian-Syrian border.

Now he tells me what life is like in confinement: “almost everyone has a television and they are glued to the screens watching the news about coronavirus. The situation is stressful, that’s true, maybe people feel more alone now, but I think that most are aware of the risks and therefore avoid meetings and physical contact. “

During this period, we have carried out numerous awareness campaigns in the villages, informing the population about the risks of the coronavirus and how to avoid them. As in the rest of the country, a strict curfew has been imposed. Now, those who live in the camp are only allowed to go shopping every day between 10 a.m. and 6 p.m.

Huda confesses to me that these days have been a bit stressful. “People are afraid of running out of staples. You see people running to the only food store in the camp, and that is not going to help prevent the spread of the virus,” he says.

This woman is a mother from Al Raqa, a city located in northern Syria, who arrived at the Azraq refugee camp in 2016 with her ten relatives. Since 2017 she has been helping us in talks about positive parenting and giving community workshops.

But the current situation has changed the dynamics at home, increasing the feeling of pressure and responsibility that he feels: “As the whole family is at home, I have no time left for me … And with all the extra housework, now I have to watch the children and make sure they attend the classes that are broadcast on television. It’s a lot of work. “

Since the schools closed, I know that Reem, 16, the daughter of Huda, has been able to keep up with his studies by watching the classes that the Government broadcasts on television throughout the country. “Staying at home all day is not very healthy, I miss seeing my friends and hanging out with them,” says Reem, who is especially affected by not being able to leave, as she is used to actively participating in our Youth Committee. The normal thing was to find her out there, with her colleagues, designing campaigns and working on initiatives that right now are paralyzed due to the ban on social gatherings.

Before the emergency, the residents of the camp depended, to a large extent, on the programs and activities that we carried out by the numerous NGOs and international organizations present here. Although the measures implemented by the Government to guarantee their safety have had an impact on the provision of some of these services, essential activities continue to operate thanks to the permits granted by the authorities to essential workers. The reason for this measure has to do with the fact that, currently, the Azraq refugee camp is a controlled environment and the only variables that could expose residents to Covid-19 would be people entering and leaving; so it is essential to limit the number of visits.

In order to try to reduce the feeling of isolation that those who live here have, we have adapted the programs and services that were already operating so that our beneficiaries can use them remotely. At the time of the crisis, we started distributing kits containing the necessary sanitary materials for girls and women to make their own face masks, as well as other protective materials. There have also been some training sessions through group calls to guide you on how to make these materials manually.

Sumaya, 37, is another of those who are participating in remote activities and who is witnessing the positive impact they are having on her daughter, Hind. “The classes are great. My daughter can dedicate her time and channel her energy into something productive … And it also helps me to stay home and avoid infections,” she explains. Her daughter is happy: “It is the first time I have produced something and I love it. Sometimes my mother helps me work on the materials. I think she enjoys it even more than I do.”

It is difficult for everyone to maintain normality in the midst of this exceptional situation, so keeping girls like Hind happy and busy in productive things is one of the main objectives during this crisis.

In addition, we have carried out an evaluation of the specific risks that people face in the refugee camp, to determine the obstacles and problems that we may encounter in this new situation. When children spend more time indoors, in close proximity to their families, we are also aware of the potential protection problems they may face. My project coordinator colleagues have been trained to be aware of and detect the subtlest hints of distress that little ones might show during online sessions.

Now I realize that it is more essential than ever that the most vulnerable population groups in our society are involved, connected and protected. So I know that it makes even more sense for us to continue working to reach the people who need us most and making sure that no one is left behind or forgotten during this crisis.